This underground art genre known as bara attracts a smaller audience compared to other better-known genres of visual works and storytelling. The little word is shortened from barazoku, which in Japanese means rose-tribe—a code phrase to express Japanese heterosexual prejudice against gay men—proudly adopted as the name of popular gay men’s print magazine (published from 1971 to 2004.) The term bara is commonly used throughout the Western world but not nowadays in Japan. 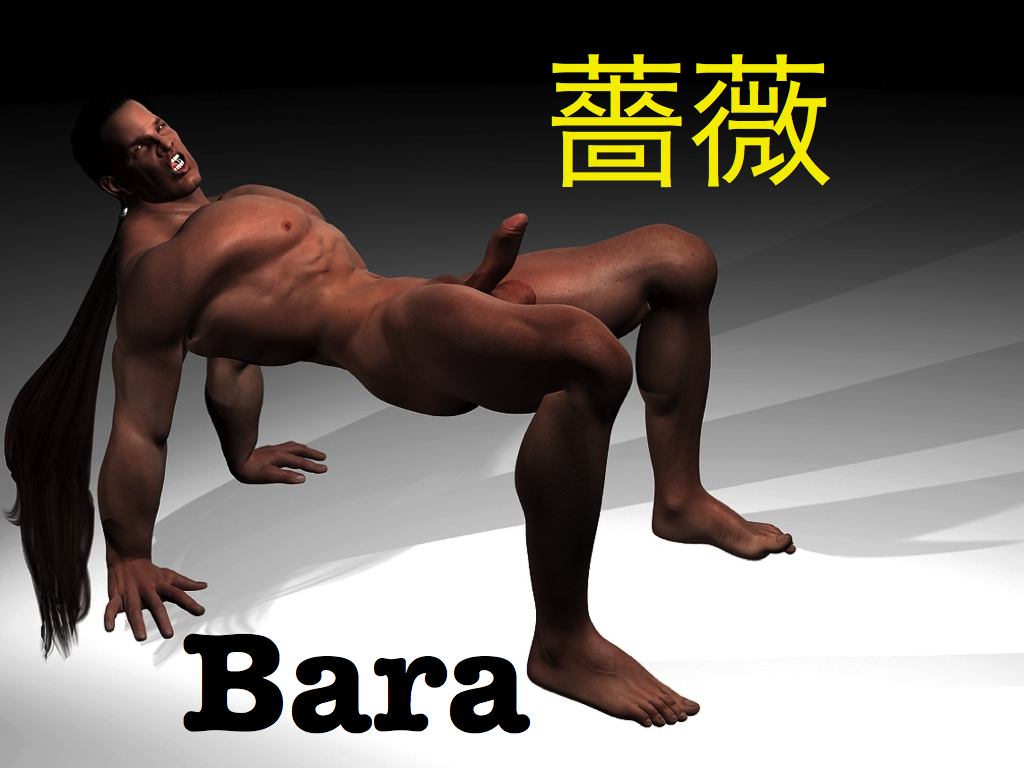 Works in the bara genre depict men in peril and such works are produced by gay men for gay men differs from yaoi which is created by female storyteller/artists for a female audience.

Author Madeira Desouza says, “I am not at all interested in creating stories or images of men who appear or behave or speak like females as in a great deal of content online intended for the gay male audience. I prefer to create stories and images of masculine men in peril who exhibit outward appearances that reveal their optimum physical condition and muscles. That’s why I work within the bara underground art genre.”

This underground art genre depicting men in peril is distinctive because it depicts gay male, same-sex feelings and sexual identity of masculine, muscular men who sometimes behave in aggressive, violent, or exploitative ways towards one another. Bara is not about romantic gay love or lovey-dovey hearts and flowers. Bara is wild, adventurous, and unflinching in how it mirrors real life men in peril and behaviors of male aggression, power trips, violent tendencies, and exploitation.

The more vanilla and bland works of young and shirtless gay men falling in love with other young and shirtless gay men leading to a happily-ever-after life certainly are a lot more safe and less emotionally challenging for the viewer and reader. Those works earn a “mass audience” of men as well as women. In contrast, the bara genre is less popular and has a smaller audience directly because the bara genre is more realistic versus idealistically romantic when depicting gay male behaviors. My choice is to work within a fresh USA bara genre created by a native USA gay male. 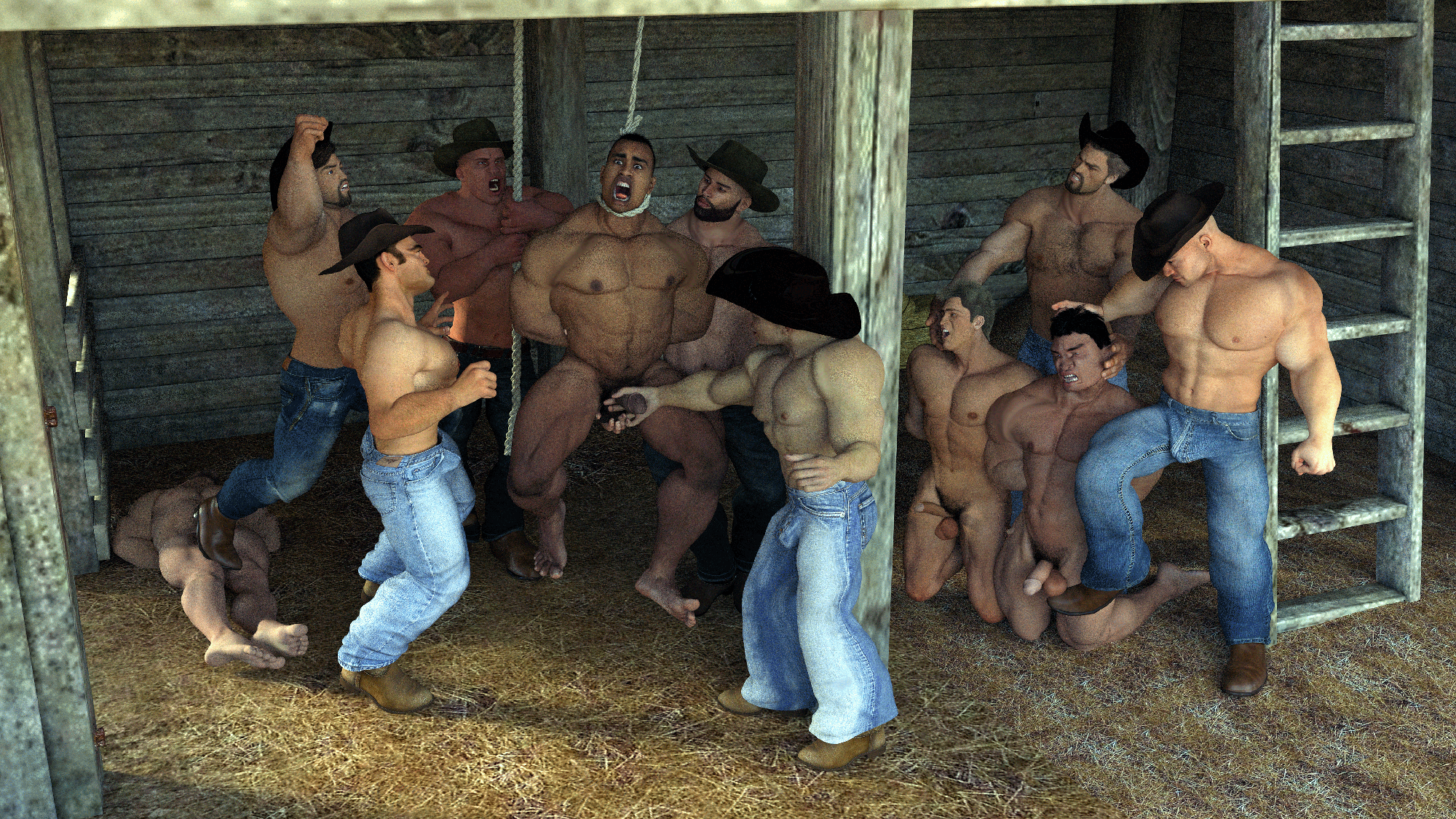 This is an excellent example of a men in peril image of mine that typifies what the bara genre is all about.

Baja Clavius: Moon Men Deep Inside pushes limits by taking bara to the level of a full-length novel (with accompanying illustrations) about masculine men involved with one another to provoke the viewer. I have seen all my life how straight people do not like to see masculine men showing affection towards one another. Straight people will accept drag shows and comedies about effeminate gay men. And why not? Those are completely non-threatening and humorous. But, if masculine men are depicted in a story or images showing sexual interest in one another, oh wow, that suddenly becomes very threatening to straight people!

Some gay men I have encountered also find it uncomfortable to witness masculine men showing sexual interest in one another. Some gays even relegate such masculine men to the pejorative category of being “too butch.”

For all of these reasons, I choose to provoke the viewer or reader in my stories and illustrations as is commonly experienced within most works like mine in the bara genre.

What I do is considered provocative. And that is my intention. When I look around me at the straight world, I see straight people who do not like to see masculine men showing affection towards one another.

Straight men and women tend to accept drag performers like RuPaul Charles, whom I greatly admire as an entertainment industry genius. I enjoy watching the RuPaul’s Drag Race series on Hulu. I was very entertained and was quite pleased with AJ and the Queen starring RuPaul in a Netflix comedy series. Straight people derive pleasure and amusement from male drag performers. As an audience, straight people enjoy laughs at the satirical comedy and the sexual ironies that RuPaul and other drag performers excel at. Such is the enjoyment of performance art, but we all know art usually is separated from the everyday life most of us live.

Major Hollywood comedies featuring men in drag such as the wonderful Mike Nichols film The Birdcage are also “safe” and “unchallenging emotionally” for straight people. That nonthreatening kind of gay man is what seems to find a “mass audience” at least by Hollywood standards. But, I don’t work in Hollywood.

I choose to depict muscular and masculine men in peril who may or may not connect with one another emotionally, physically and sexually. Feminized gay men can choose to speak and behave in flamboyant ways. They have a right in our society to do so. I respect their right to do so. But I work within the bara genre and use themes that include violence and exploitation and men in peril—not typically what appeals to the same audience that enjoys feminized gay men.

My storytelling explores conflicting and opposing compulsions that all men have. These compulsions are not limited to gay men. On one side there are impulses men have towards sustaining life, engaging in love, and being attracted to other men and building long-lasting relationships.

In the opposing direction are impulses men moving towards being aggressive, engaging in violence, creating situations of men in peril, and often causing pain and death. For centuries, artists and storytellers around the world have found inspiration in these two opposing human compulsions that no man is able to resist or impede merely by his conscious will alone.

Storytelling themes involving violence and/or people who hurt or kill others are quite common today and very easy to find in motion pictures and in television dramas. The Purge and The Hunger Games series of major motion pictures, for instance, depict people brutally hunting, hurting, and killing other people within a government-sanctioned story context. Viewers are asked to suspend thinking about believing in an almighty deity when you watch such depictions of brutality and violence in The Purge and The Hunger Games films.

Meanwhile in the real world in which we live, it is very easy for anyone to find visual evidence online of the brutal killing of men in certain parts of the world—usually because of believing in an almighty deity—where men use homicidal methods such as beheading, a bullet to the brain, hanging, drowning, impalement, and so forth.