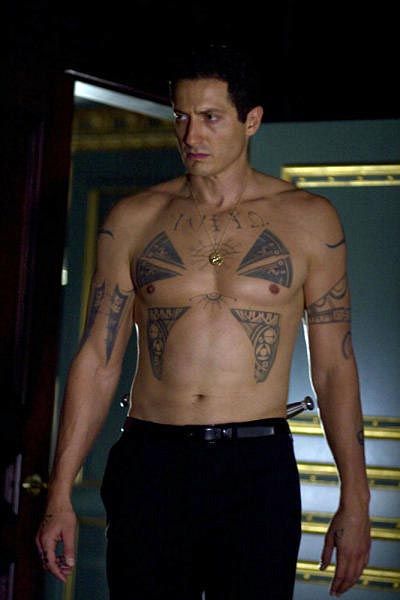 You can search online and easily find commentaries about the lack of gay male characters in science fiction. I have tremendous respect for Ronald D. Moore (Battlestar Galactica), so it did not surprise me that he took a risk and allowed a central male character in Caprica to be gay. 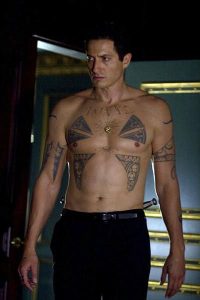 That character (played by Sasha Roiz from 2012’s episode name Extracted) was a masculine and aggressively violent character. There were never any attempts to make this gay male character in science fiction into a stereotypical cliché. Too bad that this prequel to Battlestar Galactica on SyFy got cancelled before the series could be fully realized over several seasons.

When I wrote my gay science fiction time travel novel, Baja Clavius, I deliberately wrote masculine and aggressive gay male characters. Because I am a gay man, I really would like to be as accepting of all gay men as possible–no matter what their traits might be. But, I find that after many years of field experience, I do not care much for flamboyant or effeminate gay males in either real life or in fiction.

My gay male characters are depicted as having sex with one another. They just are not stereotypical clichés. In fact, my gay male characters represent the bara genre, written by gay men for gay men, depicting gay male, same-sex feelings and sexual identity of masculine, muscular men who sometimes behave in aggressive, violent, or exploitative ways towards one another. I would choose to hang out with that kind of gay male any day of my life. I also happen to believe that, from a gay writer’s point of view, that kind of gay male character is science fiction is far more worth the time and effort. So much of the gay romances that you can find in print, on television, or in films come across as just one more stereotypical cliché.

When I wrote Baja Clavius, I decided to jump right into writing about how I think the moral codes and sexual behaviors of gay males a couple of hundred years from now might look like to us here in the 21st century. I had a lot of fun writing about this futuristic speculation and I believe that readers will enjoy it, too.

The story in my novel concerns a ruthless agency that manipulates time to make sure yesterday turns out the way it was supposed to. They have a secret base deep inside the moon from which the agency sends young gay men on time travel missions to change history by using sensual tactics to gain power and control over men. So, by definition, these gay male characters in science fiction are ruthless and manipulative guys.

Sure, my gay male characters like sex with men, but my gay male characters are not all flowery and romantic in the boy-meets-boy-and-falls-in-love kind of stereotypical cliché stories you can find everywhere. I think in real life that after the stigma of being a gay male fades from cultures around this planet, there will follow a change in moral codes and sexual behaviors. Today it most likely would be considered immoral and wrong for any gay man to manipulate another man sexually. In my eBook series, the employer (secret agency on the moon) specifically required this kind of sexual manipulation as part of the time travel agents’ jobs. But, in the 21st century, such gay male behaviors is seen in a negative light.

Gene Roddenberry, who created Star Trek used to talk about avoiding depicting how he really thought people from Captain Kirk’s time would be in terms of their moral codes or sexual behaviors for fear of turning off the audience in the 1960s. In fact, Roddenberry took every opportunity to depict Kirk in sexual encounters with many different females, which during Roddenberry’s lifetime was a sure sign that a man is macho and worthy of admiration. There were no gay male characters in Star Trek during the 1960s, but even in retrospect, nobody should find that surprising given that era’s emphasis upon the desirability of straight male conquest of straight women.

I’m happy to have received feedback from readers who thanked me for writing about masculine gay characters instead of the other, more prevalent, kind. I hope you will read Baja Claviusso you can enjoy a decent break from stereotypical clichés.

For centuries, artists and storytellers around the world have found inspiration in these two opposing human compulsions that no man is able to resist or impede merely by his conscious will alone. I happen to believe very strongly that just because you may be a gay man, your sexual orientation is not a reason for you to deny and submerge your natural male impulses towards being aggressive, engaging in violence, and, causing pain and death.

I will share one little secret with you: All the males that I have ever met in my entire life (whether they were gay or not) have shown me both sides of these classic conflicting and opposing compulsions. So, this may explain why I won’t waste my time with the sweet and innocent gay male characters who are created by writers only to reveal one-sided impulses towards sustaining life, engaging in life, and being attracted to other men.